Posted by: Indians4Africa Online on 29 February, 2012 in Home & Health Leave a comment

Astrology is and has been one of the most mystical subjects for human beings. Every  Culture  and Race, in this world believes in  some kind of forecasting or future telling.

In astrology, India holds a key position as it is the most ancient of all human civilizations.  The Indian astrology is also known as ‘ Vedic Astrology’. Vedic astrology is an extraordinary ancient science which baffles minds of even modern scientists and intellectuals. If an Astrologer is capable( that is, he has learned Vedic Astrology from credible Guru or Institution and is spiritually inclined),  he can predict future of any human being (whose date/time and place of birth are available), with such accuracy that it really is unbelievable.

Vedic Astrology is based on the “Theory of Karma”.

This Karma Theory puts things in a perspective, where we begin to realise that we all are, part of a properly conceived, meticulously planned and brilliantly executed ‘Grand Design’. We are acting out our roles as sketched out by the Great Designer.

The Karma Theory rests on three pillars and they are :-

1.  Re-birth or ‘Reincarnation’.  It is believed that everybody takes birth in this world –again and again in many different living forms like plants, animals and human; till he attains salvation or “Moksha” and is unified with the Supreme Lord or God.

2.   Man’s inescapable propensity to do karmas. An action-less existence is not possible.

3.  Lastly, the fruits of actions have to be enjoyed/ suffered. A man inevitably reaps the good or bad results of his Karmas ; in all the infinite births  he is born in this world.

Without Reincarnation, there can be no Astrology, for Astrology is merely reading the Karmic Pattern which has a link with the past life(s), and also with future life(s). This ‘Karmic Pattern’ is woven skillfully in a horoscope. It indicates the balance of ‘Karmas’ that the native is carrying , as well as his mission or task in this life.  Each one of the humans has desires and wishes to fulfill them. Each one of  us is motivated  differently,  and reacts in a different manner to a given situation. The Karmic Pattern could be studied in a horoscope by dividing  the horoscope in four parts as under :- 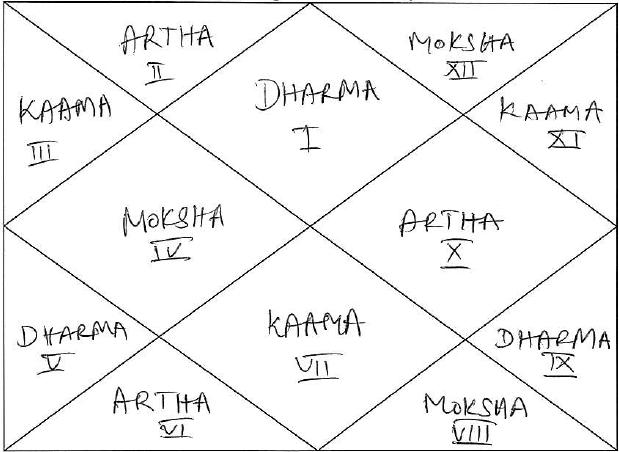 The signs and planets occupying and influencing these houses indicate the ‘Karmic Pattern’ of any individual in his present birth. If the majority of planets are in Artha and Kaama houses, the native’s inclination and motivations are oriented in that direction. He has desires(Kaama) and money(Artha); and if they match at the right time in the native’s chronological growth, he can enjoy them to full. On the other hand, a native due to achieve emancipation would have a Planetary distribution in his Dharma and Moksha segments.

In revelation of Karmic Patterns; two Dharma Houses – 5th and 9th play a noteworthy role as under :-

This Dharma house is the one which maintains and shows our link with our past life(s). It carries the ‘Sanchit Karmas’ of all past births that we have taken in this world. ‘Sanchit Karmas’ are the karmas that have already been performed in past and their fruits are to be enjoyed now. It is the house of ‘Poorva Janam Punyas’.

This Dharma house is 5th from fifth house. It indicates the karmas that we would be inclined to perform in the present(‘Prarabdha Karmas’) and future(‘Aagami Karmas’) life . ‘Prarabdha Karmas’ are the ones that we are motivated to perform in present life and the “Aagmi Karmas’ are Karmas that are still being contemplated and will be done in future.

Just see the utter simplicity and yet the deep profundity of the concept. A native arrives in this world with some balance of his karmas; this places him in society, gives him  a home and environment, where his past ‘Sanchit Karmas’ gets linked to his present ‘Prarabdha’. Once he starts performing the ‘Prarabdha karmas’, he has to, firstly, reap his ‘Sanchita Karmas’ that are linked to his past births, secondly exhaust his karmas allocated for the present, and thirdly, think about his future and do actions ; so that the balance for the future is good.

At end, we come to conclusion that karmas are akin to living. All Karmas fructify. The fructification follows the ‘Cause and Effect’ principle; which ultimately shapes our destinies; which in turn could be interpreted with the help of Astrology where this ‘Cause and Effect’ principle has been shown to be operative at a Plane , higher than the mere physical one. It shows that, whereas for any action the reaction is inevitable, the timing of reaction as well as the result of the action are held by that Supreme Divine will.

To cite an example on this, there is a small conversation in great epic Mahabharta, between Lord Shri Krishna and Shri Bhishma at the end of the war; when Bhishma was lying on the bed of arrows , on the battlefield of Kurushetra.

Bhishma tells Lord that he checked 50 of his past  births and still could not find the Karma, due to which he reached to this end in his present birth. Lord Shri Krishna tells Bhishma , that if he would have checked 6 more previous births, that is his 56th past birth; he would have got the reason for this suffering. Lord advised Bhishma , that in that birth, he threw a living snake on to thorny bush and the snake died with the thorns piercing it’s entire body. The result of that action was reaped by Bhishma in present birth(after 55 births); that he got pierced in same way on his body.

This ‘Theory of Karma’ would have achieved its aim, if it contributes to the bridging of the chasm that exists between , the man’s physical being and his Inner Core – his Soul.

[ PS:- Many extracts of this article are taken  from the Book- ‘Introduction to Astrology’ authored by my respected teacher ‘Col. Shri A.K. Gaur’ , Honory member of Bhartiya Vidya Bhawan, New Delhi ]

....offering a refreshingly CRISP vision for Indians with interest in Africa